This will be a great day.

After looking at the models Monday night, then again in the morning, I had decided on heading to Protection, KS for my starting point. The drive was pretty uneventful save for two things:

I pulled into the local Walmart and noticed a bunch of chasers hanging out in the parking lot. I walked over and met a bunch of them, many of them have names that I can’t tell you because it’s a secret. 1Ok. Fine. I don’t remember them. Happy now?

I met Matt Hunt again, who turned out to be the chaser I’d met just east of Boise City, OK right before the 5-16 Felt, OK tornado. He told me this back at the Walmart, then I forgot again until just today when he said it again on Facebook.

I might need to go in for memory testing.

I also met Blaize Edwards and Adam Davis, both cool guys. There were others, and I apologize profusely for not getting all of your names the first pass. You know who you are.

While we were talking someone cranked up Metallica on their car stereo and suddenly I was back in high school. That was kind of surreal. I ran in to Walmart and grabbed my medicine, then forgot to take it for 30 minutes because I was enjoying myself so much.

When I came back out someone mentioned something about sunscreen. Ha. Crap. I grew up Phoenix; I know better than this. You’d think that living in Arizona would have somehow toughened me, but I burst into flame when exposed to direct sunlight. I mumbled something about going back into Walmart for some and Matt stopped me. He was kind enough to let me use his sunscreen but I think it was already a little too late. I already had a pretty good farmers tan going.

After about 20-30 minutes or so, I started to feel like I was getting too distracted. Thinking about the last time I’d stopped to meet and talk with chasers I decided to get going. I said goodbye and headed north on Highway 34.

Heather called to tell me that the skies were getting pretty dark back in Denver. Out of curiosity, I checked Radarscope and saw this.

We tried to determine about where she was in relation to the northern storm so she wouldn’t get her car pelted with hail. I didn’t have enough info on the map to figure out where her office was. She has since downloaded Radarscope and we’ll get her set up with Spotter Network so I can see her location on the map. BIG BROTHER WILL BE WATCHI-ok I’ll stop.

I stopped again briefly to experiment with the camera again. Grass can be very pretty in the wind. 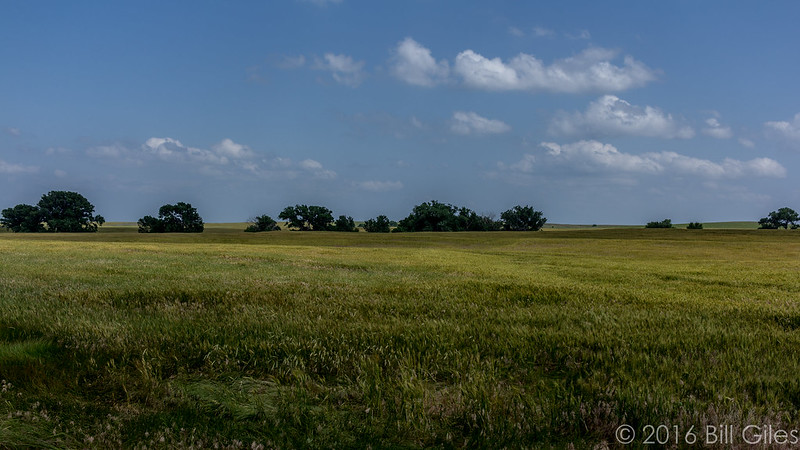 As I got closer to Protection, KS, I noticed how close I was to Greensburg, Kansas.

I think it’s safe to say that Greensburg is a town any chaser would know immediately, whether they’d been there or not. This is because on May 4th, 2007, the town was almost completely wiped off the map by an EF5 tornado. The tornado was approximately 1.7 miles wide (wider than the city) and hit just before 10PM. Ninety-five percent of the town was destroyed; the other 5% was severely damaged. Storm chasers were among the first people on scene.

It was almost a worst-case scenario. The only saving grace was that the town’s inhabitants had about a 20 minute lead time to get into shelter, something unheard of even 10 years prior. Thanks to the early sounding of the sirens and the NWS declaring a Tornado Emergency, the death toll was lower than it could have been. Sadly, 11 people died as a direct result of the tornado.

As far as hobbies go, storm chasing can get grim pretty quickly. The only other hobbies I see taking such a dark turn might be skydiving or mountain climbing. While chasing it’s easy to lose touch and forget just how destructive these storms can be for the locals who live in their paths, or how quickly following a tornado can turn into trying to pull people (or even worse, bodies) out of the wreckage of their homes.

I have not experienced this. I don’t look forward to the day that I do.

Even though this tornado happened nine years ago, I was curious about what the town looked like. I also needed gas and storm initiation hadn’t started yet. What the hell.

I drove maybe a quarter mile wast into Greensburg before I found a gas station.  Even going just that little way in, I saw two concrete slabs where buildings used to be.

While fueling up, I saw that storms were really beginning to blow up. I left Greensburg heading west on US-400 to Ford, Kansas.  On the way I really got a good look at the underside of the supercell to the southwest. I could see the rapidly developing wall cloud. Radarscope let me know that the storm was now tornado warned.

At about 5PM, just miles out of Mullinville I got stopped by road construction.

They were doing the whole “Pilot Car Takes One Lane of Traffic at a Time Down the Road” thing. Reviewing the dashcam footage later, I see that I was stuck there for about 5-6 minutes. It felt like 45. I said unkind things and stared at Radarscope.

Ten years later, I got clear of the construction and drove through Ford. Just outside town I turned down Saddle Road and drove west as quickly as possible, trying to find a good line of sight to stop and film. I ended up about five miles west of Ford before I decided I was out of time, then recorded the touchdown of the first tornado.

Man. I don’t know why I gave up yesterday. All it takes is a successful chase to put that thrill back into you.

From my vantage point I watched a funnel lower and touch down, then dance around for a few minutes.

Then it lifted, lowered again, then quickly solidified into a stovepipe before starting to wrap in rain.

I left the color balance alone for these photos, hence the orange color. I was facing west towards the tornado, so the sun is back-lighting my shots.

A local pulled in behind me and we spoke briefly. He said that he and his coworkers had just put $300,000 worth of new farm equipment in storage out near where the tornado was headed. Ouch. 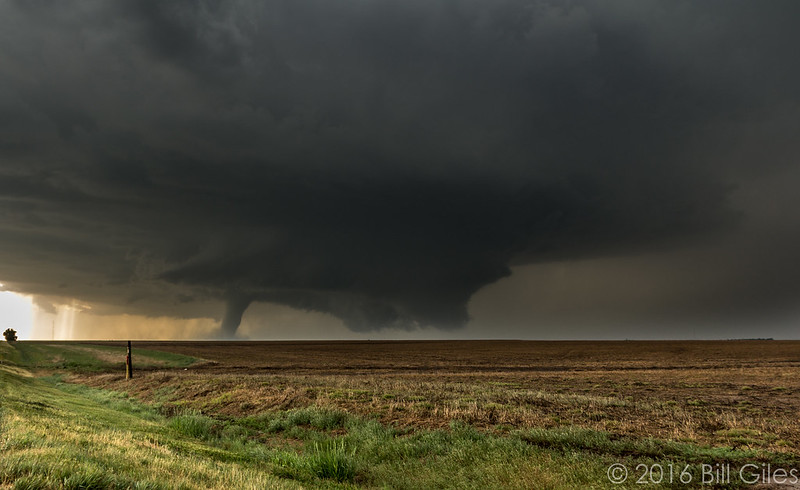 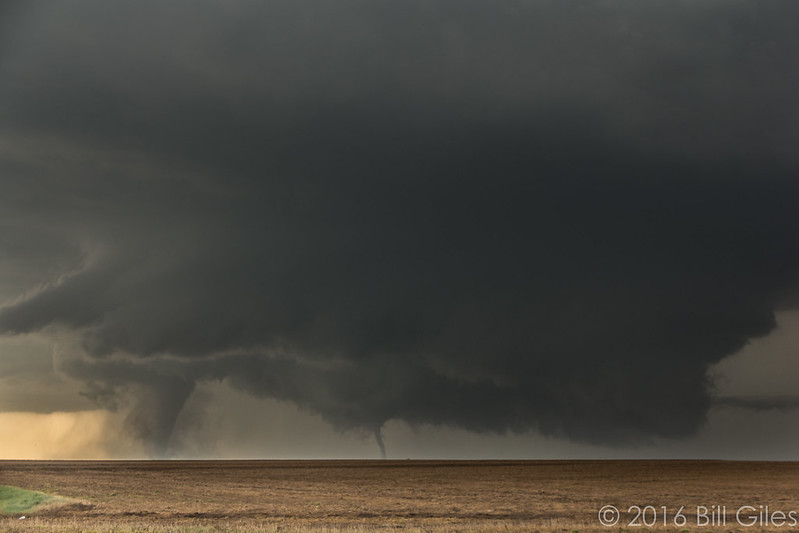 Then I moved closer again, this time north onto Highway 283 north and into a chaser convergence.

I drove a few miles north, seeing chaser vehicles stopped along the road the whole way. No issues with blocked roads though. I parked and played my own game of Frogger crossing the street. It was difficult to find a place to stand on this side of the road. There was a fairly large muddy ditch in-between us (the chasers and myself) and the fence. Very few people tried to slog through this. I ended up standing next to a tour group from England. Very nice people; the tour guide said that this was his 161st tornado. I told him that I needed to catch up which made him laugh.

I’ve also learned another thing about myself. I love weather and boy do I love telephone poles! 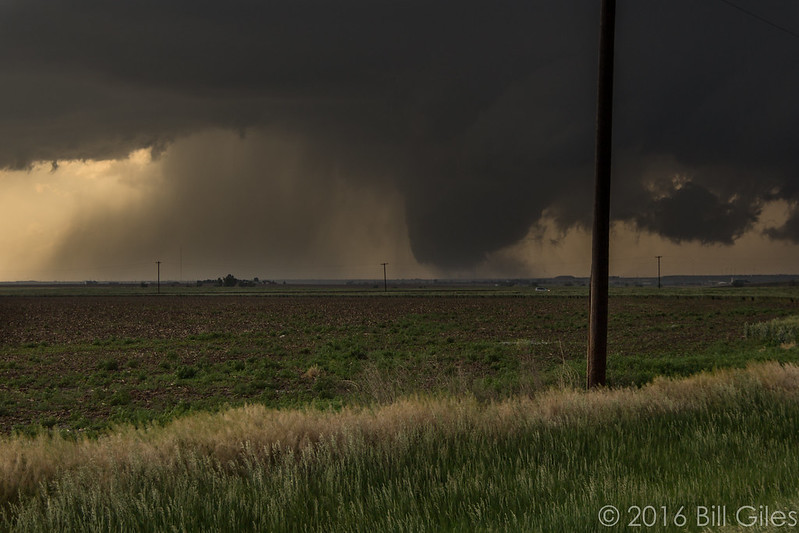 I have an unbelievable amount of pictures with telephone poles in them from these chases. I’m cautiously optimistic though; this might mean I’m running out of dumb chaser mistakes to make and have now crossed into dumb photographer mistakes.

We all watched the tornado’s condensation funnel lift and touch the ground, but the debris swirl never really left the ground. We watched it obliterate what looked like a large storage shed. I thought about the local I’d met earlier. Hope that wasn’t his.

All in all, I was impressed with how the chasers mostly self-policed. Everyone I saw made sure they were well off the road. They didn’t stop traffic to cross the street; they waited for openings. Some even called out to others to watch out for a oncoming vehicle that they may have missed seeing.

The storm began to head into the western part of the city, seeming to lift as it did so. I decided that I wanted to move north one more time, but I needed to make a more important decision. East or west? I’d already opted not to follow the storm into Dodge City. I could see law enforcement vehicles off to the north in the distance and I didn’t want to get mixed up in whatever they were doing. Plus I decided before starting this hobby not to chase into cities if at all possible.

I cut left to Highway 56 to ditch most of the chaser convergence, then turned north again and followed the wall cloud (all I could now see) into the city outskirts.

The power was out in this entire area. I was now between severe storms so it was pretty quiet and a little eerie. I stopped in the parking lot of a hotel and weighed my options.

My thought process was to drive west out of this line of storms and head southwest to Ensign to jump on the storms out there. As you can see in the radar image above, one of them is tornado warned.

So I continued north to Wyatt Earp Blvd. and turned west again. I tried a road north to see if I could get a visual on any tornadoes still in the storm, but it was all rain and hail. It started to hail on me a little so I went back south and continued west to Cimarron.

Two minutes later I got caught in another hailstorm from the storm due south of me. Near me were a bunch of law enforcement vehicles; I think they were trying to set up a roadblock. We all took a pounding and I had to stop at one point because the wind and rain made the road impossible to see. I crossed the tornado damage path as well at some point, but barely saw it. I kept my windows, and continued west before the local law enforcement could recover and try to trap me there.

I pushed through and came out into sunny skies. It’s so jarring when that happens.

South of Cimarron I pulled over and considered my options again. Now that I’d made my decision to go west I regretted it. I started planning my path back east.

Then I looked around and realized what I had in front of me. 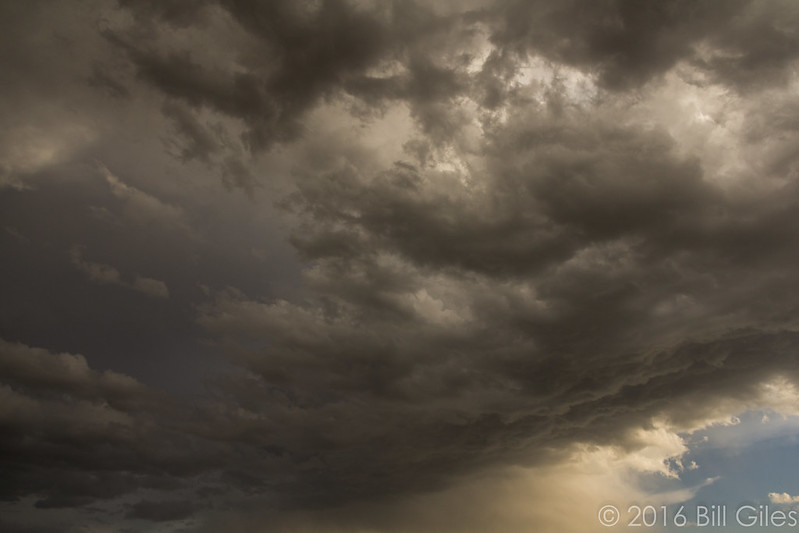 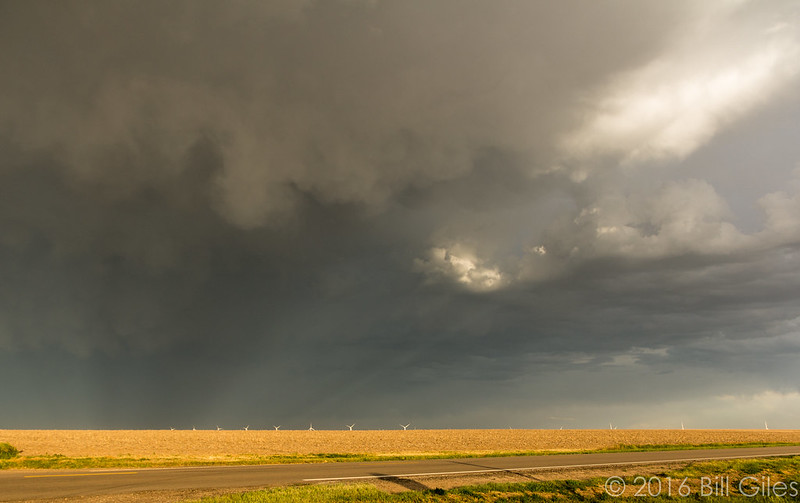 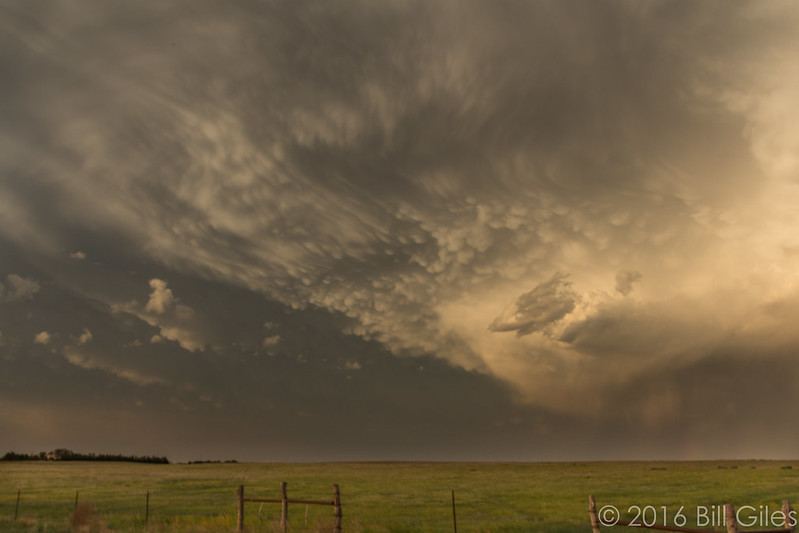 I spent the rest of my day out here, moving north half a mile once because a little storm started hailing on me again. 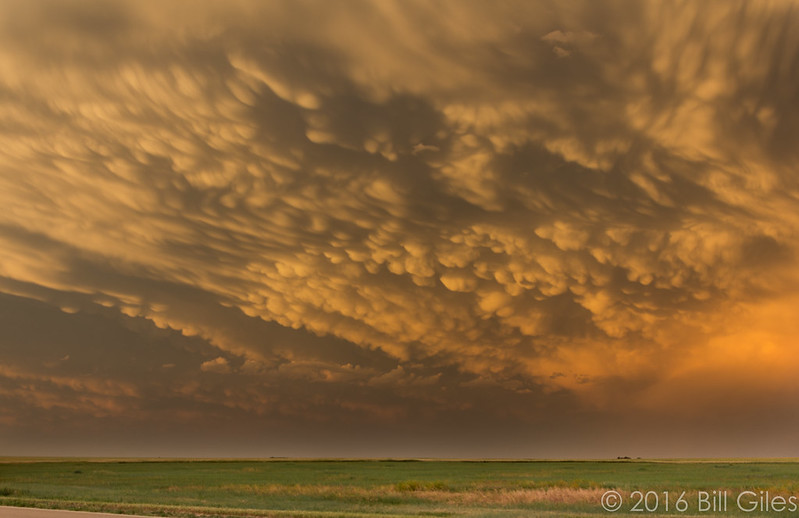 The mosquitoes arrived, making me regret my decision to chase in shorts. 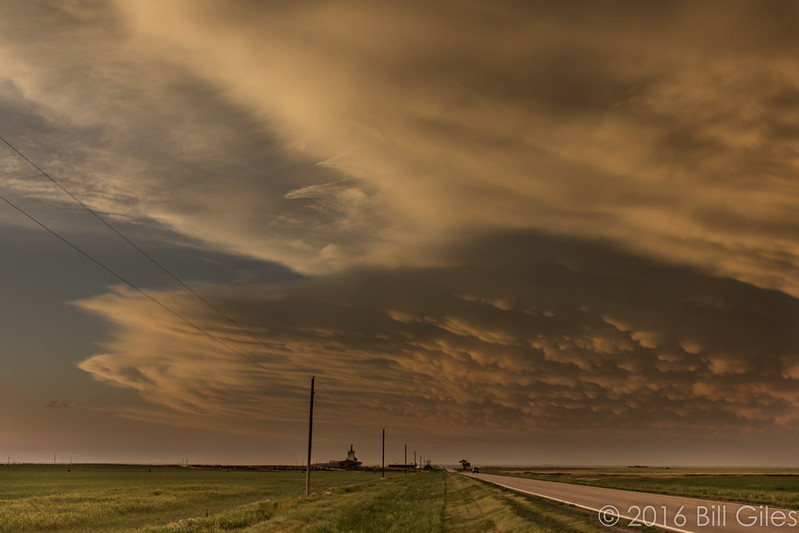 And that’s the day. Here’s the map from the Dodge City NWS report for May 24th.