Honestly I just needed to get out of the house.

The last couple of weeks have been pretty busy. Heather and I were finalizing our preparations to move; getting all the paperwork signed, setting up utilities, that sort of thing. Heather was getting ready for her trip to Phoenix to meet her new niece. My mother, sister, and brother-in-law were finishing preparations for their Alaskan cruise that they’d booked months ago. I myself had nothing special planned. I was staying home to take care of the cats and finishing up any remaining house stuff.

On July 3rd we found out that my brother-in-law’s father died suddenly and everything went off the rails. I needed to get to Phoenix in a hurry, so I drove down the next day and stayed with my family for a few days. Heather flew down with her already purchased plane ticket the day after that and attended the wake, then we drove back a couple of days later.

With all of that settled down we still had to finish the house arrangements and actually move out.

The move? Not fun. We had a third story apartment as well as a 10×15 storage unit to clear out, and the unit had to be done by the end of the month. We don’t really know many people here in Colorado still, 1Not very well, anyway. Heather has met some nice people at her work, but we weren’t sure we were on “Hey man, wanna help us move?” footing with them so we did it all ourselves.

The house is full of spiders though. Boo! If you know me you’ll know just how unhappy this makes me. I hate spiders.

So with all of the packing, moving, unpacking, spiderslaying, etc… this chase was really just a impulse decision. I didn’t put a lot of research into it. I glanced at the SPC Outlooks, breezed over the NAM and decided to head for Sidney, Nebraska. I decided that I might go as far north as Alliance.

Heather and I have switched cars recently because my car gets great gas milage, so it makes more sense for her commute. I took her Toyota RAV4 out chasing which was fine, except I forgot that my car has all of my hard chase lessons built into it. It’s rigged so I can chase whenever the opportunity presents itself, comfortable in the fact that everything I need is with me…

Not too big a deal, she has an old cheap tripod in her car. I can’t trust it too much though; one of the legs likes to pop out of its little plastic socket which suddenly makes it into a bipod. I’ll just use the dashcam phone with it.

Not having the dashcam was mildly irritating, but also kind of nice since I have to mess with that stupid phone a lot. I have a little mini-tripod with bendy legs that I got off Amazon awhile back, so I tried to loop it around the rearview mirror bracket and then stuck the dashcam on it. It seemed to work alright, then I turned left and the whole thing swung around drunkenly so I gave up on it.

I headed out of Castle Rock and through Denver, reaching Sidney a few hours later. Nothing was going on weather-wise, so I decided to press north to Bridgeport. I stopped to get gas there and went inside the attached convenience store for a quick snack. They had Vic’s Yellow Cheddar Cheese popcorn which was a pleasant surprise. I haven’t seen it in stores since I was a kid. Leaving the gas station, I puttered around town for awhile, then decided to head west to check out a couple of storms going up near La Grange, Wyoming. They didn’t look that great on radar, but I had hopes that they’d mature and head my direction, meeting me in the middle.

They didn’t. The stronger of the two cells just kind of sat near La Grange for a long time, not really strengthening but not dissipating either. It went on long enough for me to doubt my choice and stop halfway to reconsider options. I also decided to clean Heather’s car with some detailing wipes she bought awhile back.

About fifteen minutes later I decided to continue on west. Nothing was happening to the north at the time and I figured that this option would end up keeping me closer to home, since it was supposed to be a day chase only. This decision would bite me later.

I headed along highway 88, occasionally stopping for pictures.

New cells started to form northwest of my location and I decided to pursue them. My main target now had some other storms going up behind it and following in its wake. I wanted to dart in, set up, and take whatever pictures I could get before I had to run south again. I ended up on Robidoux Road (which is fun to say), on the corner of a little hairpin turn near Summit Ranch Road. My target storm had a very low base which looked promising. It wasn’t very photogenic, but the storm following it looked great. 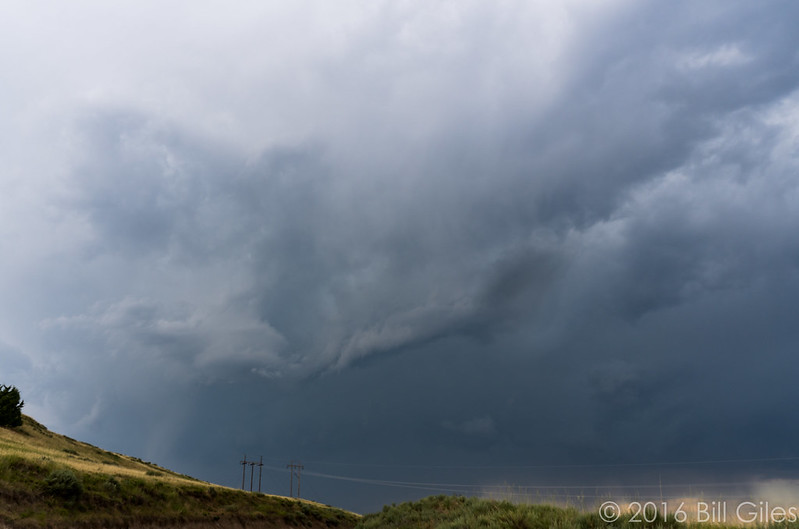 This was originally a ten minute video. I know this, because it was going to be an eight minute video and I decided to brave an extra two minutes cowering next to the camera while lightning strikes got closer and closer. I finally decided I was pushing it, both for my electrocution chances and for getting hit with the oncoming hail core.

I packed up and took off, briefly toying with the idea of using Summit Ranch Road for my southern escape route. I rejected it because it went straight into the canyon and I had no idea what condition it was in. Also, I could see cattle wandering freely around on it. Best to take the road I used to get here since I know the condition, and hope I beat the storm. 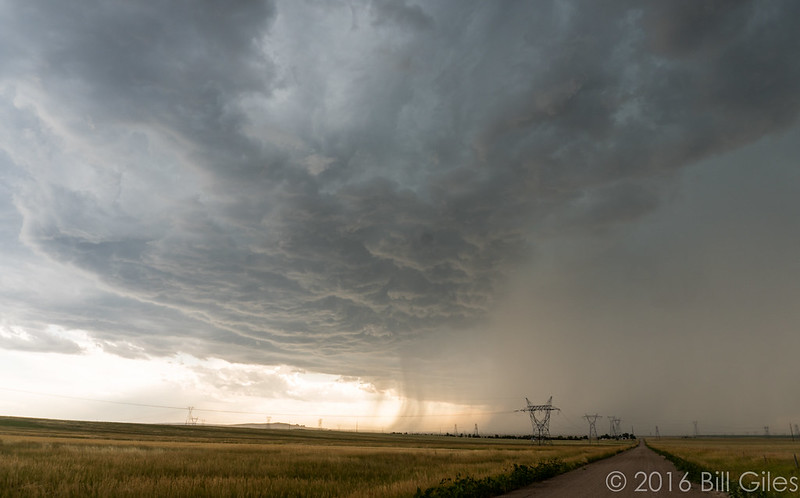 I made it with a little time to spare, passing some soon-to-be unfortunate cattle. The hail core went over that field probably five minutes later. I always feel bad for the poor farm animals that have no shelter from the weather.

Once I got back to highway 88 I decided to chase the last storm in the line. At the time it was showing the best organization on radar and looked like it was strengthening. I had to hurry though; all of the storms in the line were now moving faster and turning southeast, meaning I needed to run west fast to avoid getting caught.

I made it, missing the rain and hail but it got pretty windy. By this time, all of the storms unfortunately showed signs of outflow dominance. The show would soon be over, and the only storm worth pursuing (from looking at radar) was at the front of the line. I’d chosen…poorly.

Of course around this time northwest Nebraska lit up with severe storms and even a tornado warning.

Ah well. I’d gambled and it didn’t pan out. I headed for home and got there around 11PM. Two spiders were waiting for me in the upstairs guest bathroom.

Rest in peace, Nelson Culley. You were a good man and you raised some great kids. I’d have been honored to have you as a dad.