Everything was going well until it wasn’t.

I’d had no real intentions on chasing anymore this week. We’re still trying to unpack and set the the house up so I have plenty to do on my plate. But out of habit I glanced at the SPC Outlook the prior evening and it looked interesting enough to start looking at weather models and local news forecasts. These small targeted backyard chases are irresistible.  I didn’t go as far as to choose a target that night, but I had a feeling I might end up back in Wray.

I woke up early the next morning and rechecked the SPC Outlook.

Nice. Things still look good, maybe even better than the night before.

Forecast time, the short version – I concentrated mainly on the NAM as my model of choice, and decided that the mixed layer CAPE and low level shear values around Akron, CO made it the most attractive target today. The Supercell Composite seemed to back that decision up. I planned on heading to Akron, then reassessing and moving east to Yuma if need be. I could use highway 59 for a north/south option to intercept as needed.

I started to pack up, then realized I’d forgotten to tell Heather not to drive my car to work. I called her and made plans on swapping vehicles later in the morning. Driving her car the previous day made me more nervous when out chasing. I played it super safe to avoid damaging her car, which was a little frustrating a couple of times.

But first, there’s errands to run. I got a haircut, because shorter hair protects you from lightning. That isn’t true, but, my hair had reached maximum awkwardness so it must go away. I stopped at a Supercuts in Parker and the girl interpreted my haircut description as “throw caution to the wind and just give me a flattop”. Thanks. It’s definitely shorter now.

Then it was back to our old apartment complex to drop off the final rent check like a good tenant and to dump trash like a scumbag. We’ve been using their dumpsters for anything large that we need to throw away. We still technically live here so I have zero guilt about this. We filled Heather’s SUV full of beat up cardboard boxes and an old cat stand to toss out. Actually, the cat stand was loaded into her car days ago and I’d forgotten about it, so it went on my last storm chase. It has a little bell that jingled happily on every road bump which made the chase more…festive? I was done with Mr. Cat Stand by the time I hit Wyoming and badly wanted to leave it at the rest area I stopped at. I hope it had a good time.

Finally I drove out to Heather’s work and swapped cars. As a bonus, she’d snagged me a donut from her meeting. White frosting and rainbow sprinkles. Yum. I like her.

Ok, ready to chase. I headed out of Denver and stopped in Fort Morgan to gas up and get lunch because all that donut did was make me realize how hungry I was. While eating, I glanced at the SPC page.

Then I drove east to Akron. I paused there briefly, then decided that I wanted to be further east and continued on, passing through Otis and stopping in Yuma.

Before going on, I’m going to sidetrack a little and talk about the SPC Convective Outlook pictures I post. You’ve probably noticed a lot of them in today’s chase log.

The Storm Prediction Center, or SPC, releases their Convective Outlook product every day. These outlooks consist of a lot more than just the two pictures I slap on top of my chase logs though. They also include forecast summaries by the meteorologist or meteorologists that put it together, as well as other graphics showing the chances for high wind and hail. Since I mostly focus on tornadoes for chasing, I assume that high wind and hail come with the territory so I don’t post those pictures on my blog.

The SPC doesn’t just issue one Convective Outlook per day. They update and re-release it four or five times throughout the day, and they’re all time stamped in Zulu (UTC) or Greenwich Mean Time. Right now Zulu time is six hours ahead for those of us in Mountain Daylight Time,

I try to standardize my chase logs by posting the 1200z, or 6AM SPC Convective Outlook pictures on my chase logs, because it’s usually the most up-to-date one (and usually the last one) I look at before I start a chase, and the one that I reference for narrowing down my target area with regional forecast models. I don’t usually look at it once I start a chase because it’s not terribly useful then; it’s too non-specific to choose a target with. Looking at current weather conditions and surface observations is way more important. I don’t know why but I checked it fairly often during this chase, probably because I had a lot more time on my hands than I’m used to.

I was feeling pretty good about getting into position so early. The skies were blue but I knew that would change quickly once initiation started. I checked the SPC website and they had a Mesoscale Discussion regarding my target area. Everything looked primed to explode, and I was feeling confident with my location. Let the games begin!

An hour passed. The skies were blue. No problem, I knew I was pretty early. I listened to music and messed around with my phone.

Another hour passed. The skies were still blue. I was really bored now, and had changed parking locations four different times looking for a good cellular signal. I ended up in a cornfield just outside of town, right next to a cell tower. Can’t beat that, but I’m starting to suspect that things aren’t going right, so I’m checking local weather forecasts.

About another hour goes by. Skies…. STILL blue. Something is wrong.

I rechecked the SPC Mesoscale Discussions. None, No Watches either. Uh oh.

So I rechecked the SPC convective outlook page one last time.

What. The. Hell. Where’s the Enhanced outlook? No tornado chances? What?!

I’ve sat around this dumb town for hours, ready to lunge at anything promising. But there’s nothing going on. Nothing at all. And there isn’t going to be.

Not quite understanding what happened, I drove slowly back to Akron. On Radarscope, I could see a few smaller storms organizing in southeast Wyoming and heading southeast into northern Colorado. I contemplated heading north towards Atwood to meet them, but decided to get further west instead before intercepting. I continued west back to Brush.

In Brush I stopped at a gas station and debated what to do. The storms moving southeast were moving fast and I didn’t want to go home empty handed, so I headed north out of Brush through Snyder to intercept and hoped they would organize.

Just outside Snyder, I passed a very hairy man wearing only cutoff shorts, pedaling what looked like a large tricycle.

I stopped a couple of times to take pictures (of the weather, not that guy),  but the storms weren’t really photogenic. They were low to the ground which gave me hope for some surface based setups, but nothing could get organized. I dropped back south a little so I wouldn’t get caught between them in case I was wrong, but they just drifted by. Then I looked at Radarscope again and saw the area south of me near Colorado Springs lit up with severe storms.

Wonderful. I woke up early and drove hours for nothing. I could have slept in, stumbled out of my driveway at 5PM and driven maybe an hour east and caught that setup. Instead, I’m over 90 miles north of any action, and four hours from home.

Colorado weather can be frustrating sometimes.

The sun was setting as I drove south towards Woodrow and I didn’t want to come home empty handed, so I decided to stop and record the sunset with my iPhone. My dashcam caught it too and did a better job, but I got in front of it briefly and now I don’t like the footage. Man I complain a lot.

So, here’s a few pictures instead. 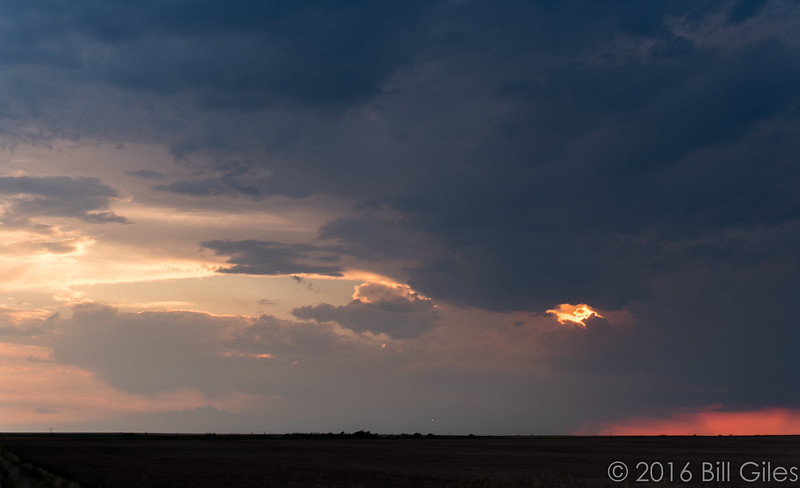 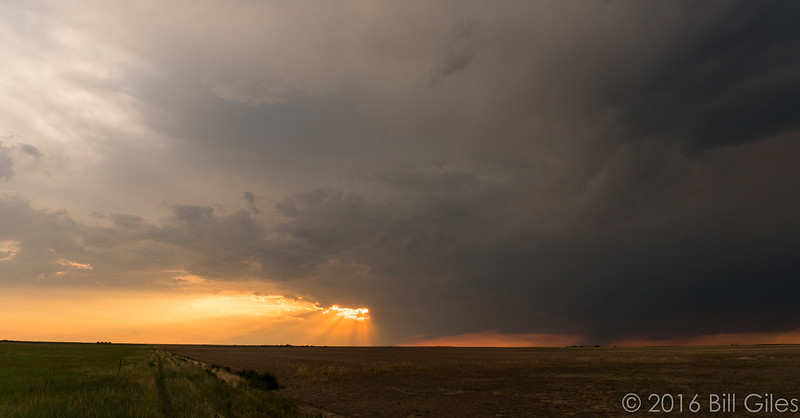 At least something good came of this.

I headed for home on US-36, then jumped to I-70 west. Once I hit Denver I had to pull over briefly because of a storm moving through the city, severe warned with large hail. I trailed behind it and let it weaken, then punched through and continued home.

There was a beautiful lightning show going on outside in the distance, visible from the bedroom window when I got into bed. Taunting me.