Let’s talk about backups. Do you back up your data?

I do…but not all of it, and not consistently.

Remember that last blog post? Driving out to Las Animas…lone chaser on a great looking storm?

My hard drive crashed. It’s all gone. All of my pictures and video.

The annoying part is that I lost the data trying to fix this very problem. I’ll explain.

Back in July, I was concerned that the hard drive I use for storage was approaching five years old. That’s well out of warranty and old enough to start thinking about potential disk failures. So a few weeks before we moved out of Spider House, I bought a brand new Seagate 4TB replacement drive. The newer, larger drive would solve some swiftly approaching capacity issues too.

I installed the new drive, copied everything over to it, and unplugged the old drive. While I was at it, I did another copy of my data to an external 3TB USB drive.

August 8th rolled around. I went storm chasing. After the chase I copied everything from both cameras to the computer. As usual, once I confirmed everything made it, I reformatted my memory cards to prepare for the next chase.

I did not back up my data afterward.

The NEW drive crashed on August 30th. Totally dead; hardware failure. I couldn’t pull anything off it. I even pulled the drive out of the computer and stuck on a USB 3.0 mount to see if I could make the computer recognize it.

I guess I’m sort of glad that my busy schedule didn’t allow for more storm chasing, otherwise more would have been lost. I should’ve been smarter about my backup plan; hell, I work in IT so I know better.

I never bothered to set up a backup plan because for a long time, I didn’t really have anything on the computer that I cared that much about. The occasional manual backup to a flash drive or (later) to the USB drive was fine.

Once I started chasing, all those pictures and video I was generating meant that I cared a lot more.

There’s now a replacement hard drive from Seagate in my computer. It’s all formatted and ready to use.  I haven’t touched it. I’m just watching it suspiciously for awhile.

ALSO BEFORE WE BEGIN, BUT NOT AS IMPORTANT

This post will cover two chase days, probably the last ones of the year for me. One was a short hop through eastern Colorado, and a bust. The other was…well, you can read it and see what you think.

Additionally, Heather wrote a blog post about these chase days too. Check it out!

We left around 1PM for Limon, watching some storms pop up on radar near Colorado Springs and Pueblo the whole time. 1I think I’ve typed that sentence on every chase this year. I need to start every chase in Pueblo.

We got to Limon and grabbed a quick lunch, then continued east for Burlington. Once we got to Burlington, the storms that had started near Pueblo and had marched northeast across the state became too tempting to ignore. Also, it was really the only game in town. We headed south to intercept the leading edge of the line.

The results weren’t especially great as far as storm photography goes, but we got a pretty sunset and a huge rainbow. Here’s a small album of what I got. Click the pictures for bigger versions. 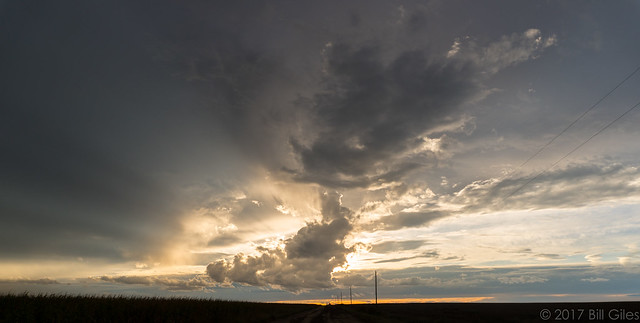 We went storm chasing again.2I feel you looking at me like that. To be fair, the previous two weekends were spent near Independence Pass looking at leaves. We did a lot of the leaves thing!

We headed out a bit earlier today at around 11:30AM, and stopped for a few minutes in Atwood, CO to watch storms pop up behind us near Ft. Morgan. Tempting, but it was early in the day and I didn’t think the environment was primed quite yet. Always good to wait a little while and see; Colorado is wonky like that.

Continuing on, we got to Sterling and grabbed some lunch at Wendy’s, then took Highway 6 to Fleming. We stopped outside of Fleming to take a few photos of a storm approaching from the southwest, out near Otis. 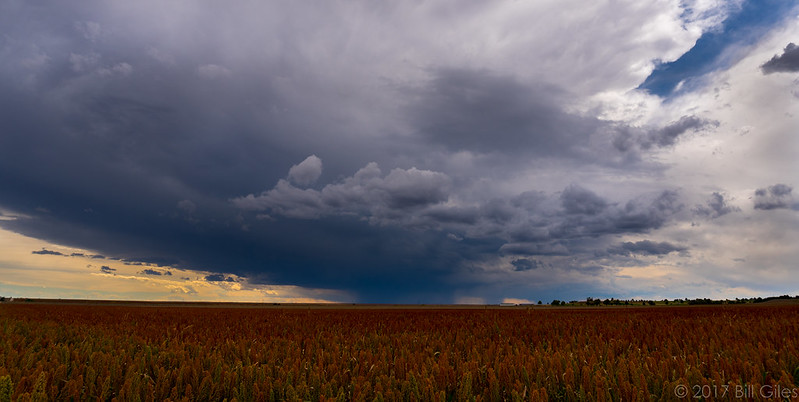 This one had my attention. It was strong, showed signs of rotating on radar, and was moving slowly. Once we hit Haxtun, I decided we’d try for an intercept and hope things were livelier than what I was seeing on radar once we got there. I really wanted to get in position south of the storm, which meant we had to cross the path.

I think that sounds more dangerous than it really was, which is not my intention. The storm wasn’t severe warned and it was moving pretty slowly. The only real concern was large amounts (or size) of hail and poor visibility at that point. We turned south on CO-59. 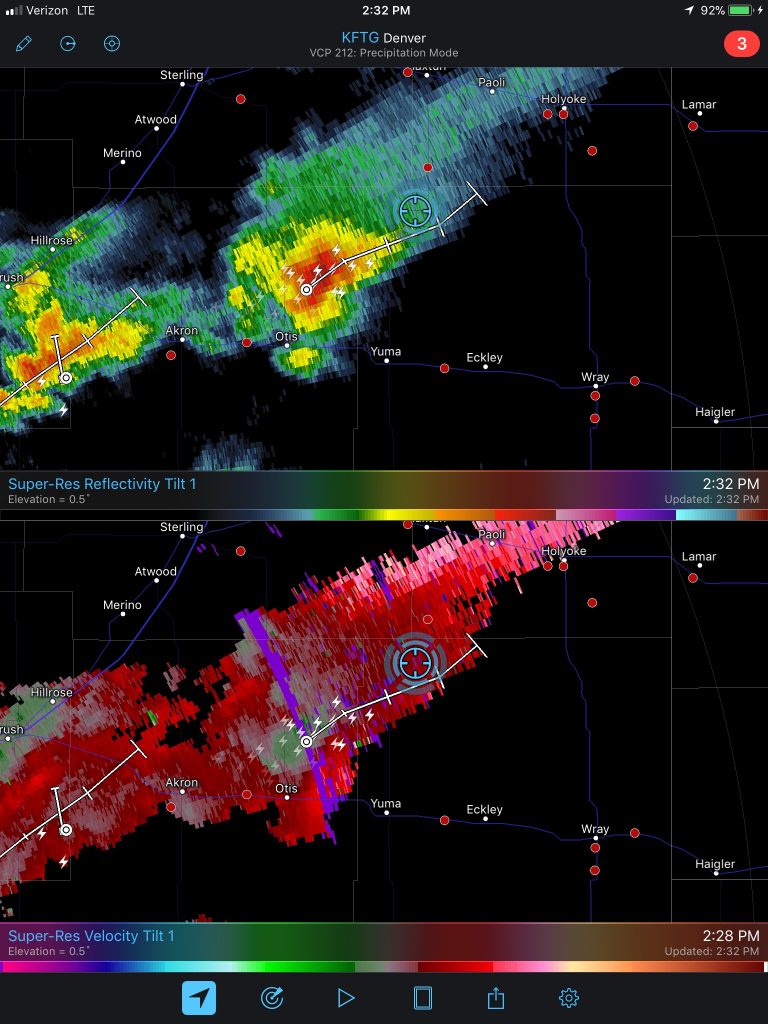 We timed things well and plopped ourselves right underneath the rain-free base as it came past. However, it was clear that I’d mistimed the timing of the intercept. This thing needed more time and better conditions to really get going. 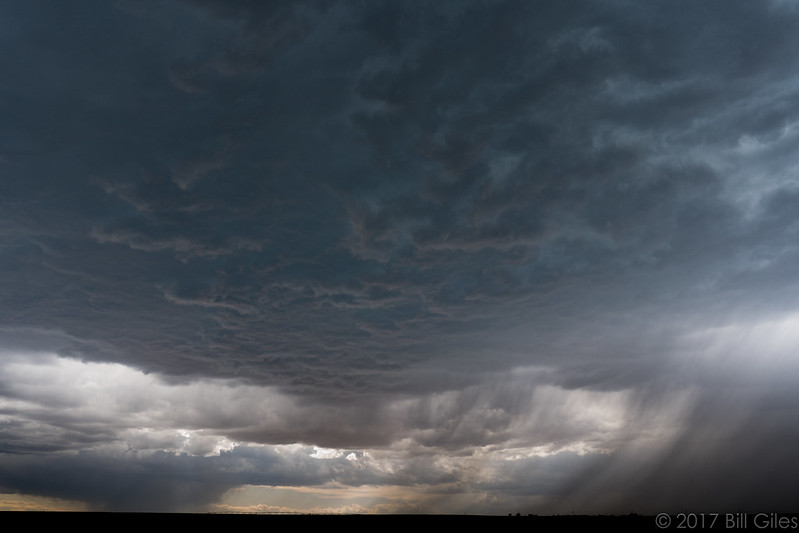 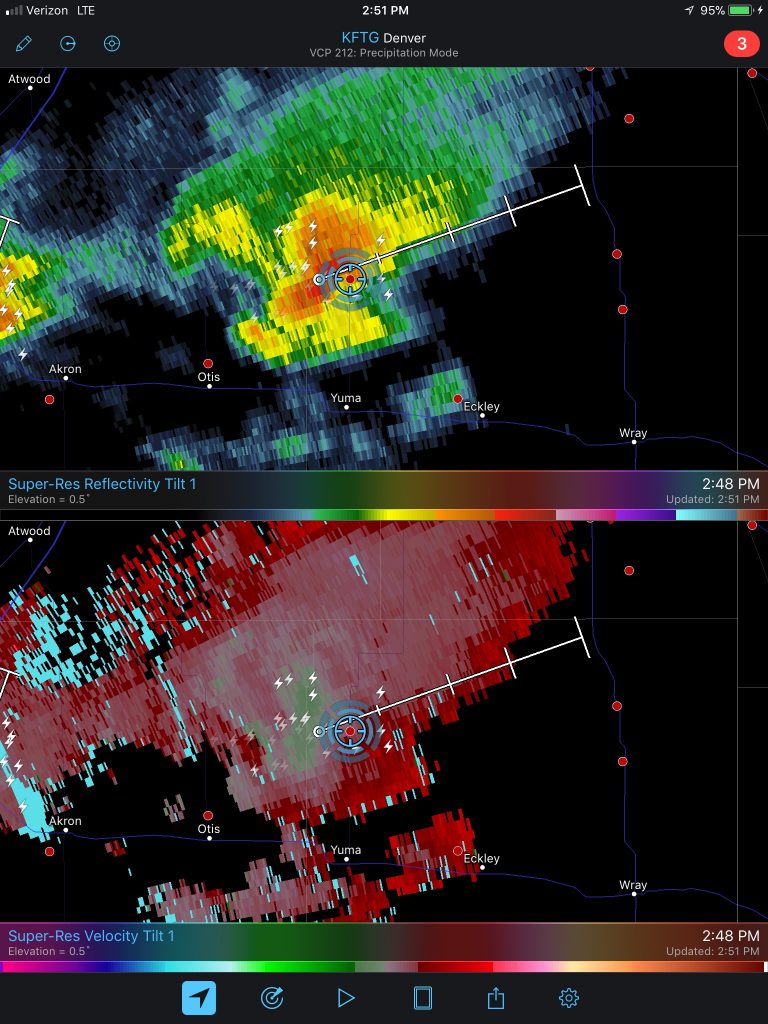 So…right place, wrong time. The storm was still strengthening though. We continued south to Yuma, then turned east on Highway 34 towards Wray and a possible second intercept.

I swear if I see another tornado at Wray I’m moving there.

The storm went severe warned as it approached highway 385, well north of Wray. As we entered Wray though I had a suspicion that we wouldn’t be able to get as far north as quickly as we needed to. I was also worried about limited road options to the east without punching through our target again, a bigger concern now.  So after wrestling with the options. I opted to continue east towards Benkelman, Nebraska. My plan was to head north again out of Benkelman and re-intercept around Imperial, Nebraska.

As we headed to Benkelman, I was also eyeing a line of storms on radar near Hoxie, KS. There was no way we could get there in time though, as it was already around 3PM. Still, they looked really organized and apparently a lot of other chasers thought so too.

Reaching Benkelman, we turned north onto NE-61 towards Enders, proceeding with the plan. However  there was this little storm I’d been watching gather strength on radar as we drove. My initial thought was that we’d pass through it and get rained on. But as we got closer, it matured into this. 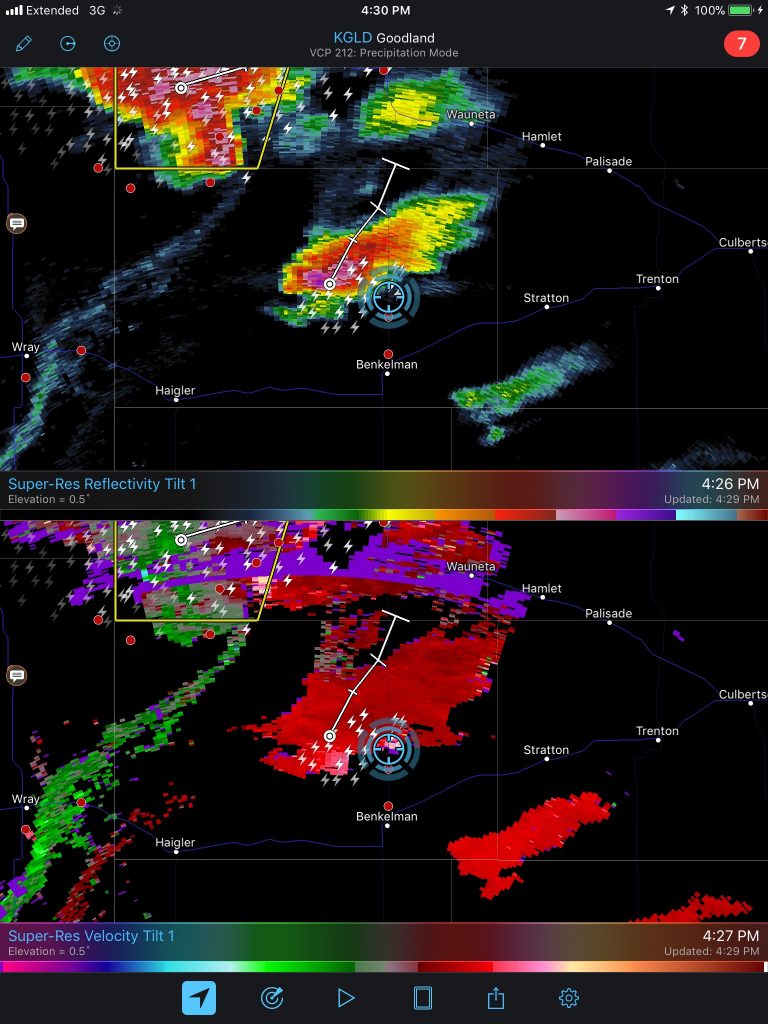 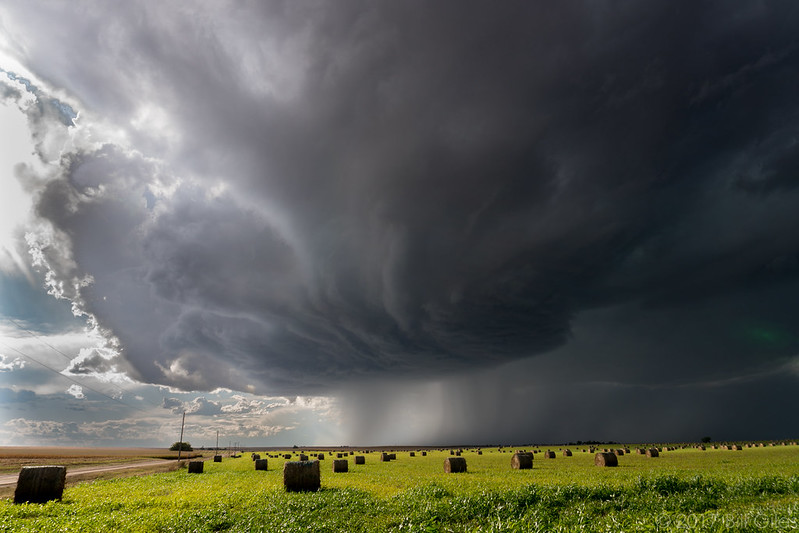 We followed the storm , just behind the path of the hail core (we found dime sized pieces), and stopped. 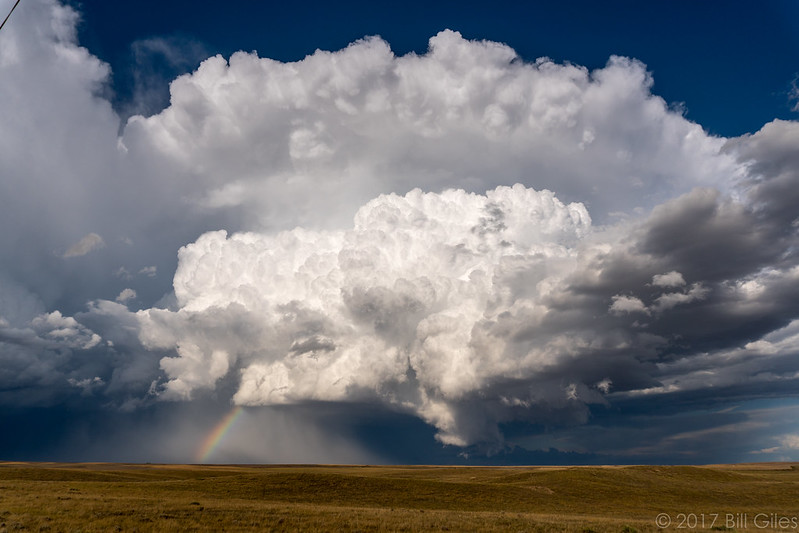 Wow. Super photogenic. This storm became our primary focus for the rest of the day. We just sat next to the highway shooting pictures and video.

As it started to slip further away, I thought that we might be able to intercept it again. We ran north towards Enders, then turned east back onto Highway 6 towards Palisade. A slight jog northeast and north onto NE-25 and we were approaching it again, near Hayes Center, Nebraska.

We got a little ways out of town and managed to slog up onto a hill. We stopped because it just didn’t seem smart to continue and camped on our muddy hill, with the storms cycling and retreating northeast away from us. 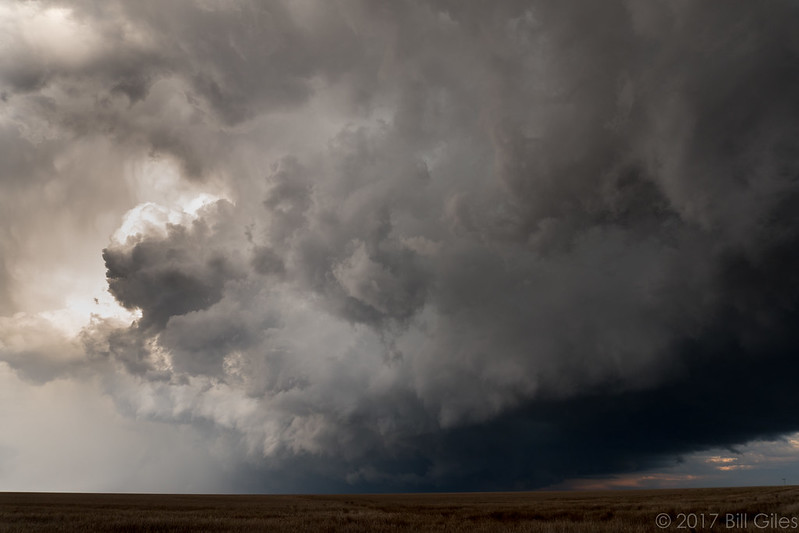 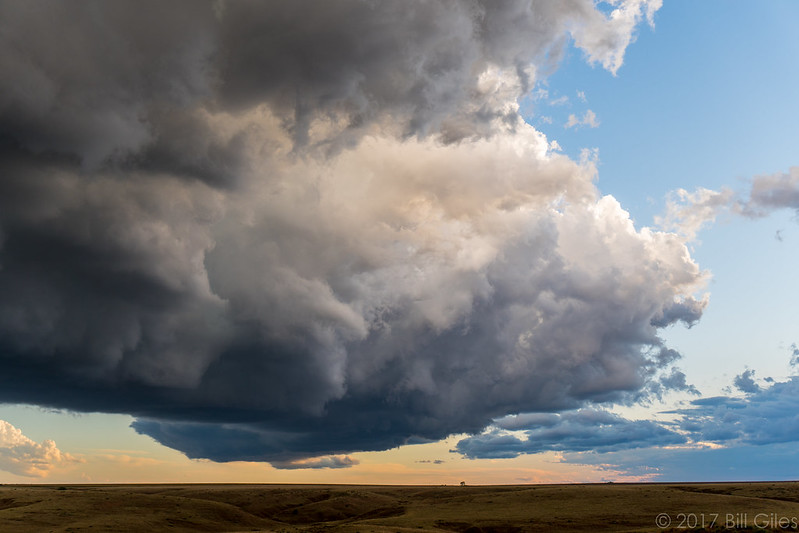 We stayed there probably 30 minutes and talked about packing it up. I didn’t want to let it go, but we had no good east/west road options. I tried briefly to head down the muddy road further but road conditions got worse quickly. My poor Hyundai had reached its off-road threshold. It just wasn’t worth getting stuck away from town, and with a four hour drive ahead of us with the next day being a work day, we called it.

The lightning show behind us on the way home was amazing. I wish we’d had more time to set up for it.