NOTE: No radar pictures on this one. If you like those sorts of things, sorry! I don’t know where my head was.

A fun little chase for the start of summer.

Even though the SPC outlook called for only marginal risk today, I thought it looked pretty good for a short chase. Tomorrow looked possibly even better. Why is that?

June marks (from what I’ve read and have been told) the peak of high plains chasing, and the name of the game is Upslope Supercells. Thanks to the magic of orographic lift, and occasionally the Denver Convergence-Vorticity Zone, you can get supercell thunderstorms strong enough to produce tornadoes. You also will more frequently get non-supercell tornadoes like landspouts and gustnadoes.

This is commonly called “Colorado Magic” by storm chasers, and it’s a large part of why I moved here.

Looking at statistics of tornado touchdowns by county, and talking with long-time residents, I’d initially decided I might only need to do one of two things to be successful in my quest to see a tornado:

Denver International Airport looks like it averages one tornado a year (not hitting it, just being spotted near it). At the time I started chasing, my goal was to see at least one tornado my first year, so this seemed like a distinct possibility.

On the other hand, Weld County has the highest number of tornado hits measured per county in the entire United States, with a sample set stretching from 1950 to 2011. This number beats every county in tornado prone states like Texas, Oklahoma, Kansas, and Florida. Good odds for a place to be close to and it’s beautiful chasing territory to boot, with nice flat landscape and lots of good road options.

That was then. It’s now June, and I have been shamelessly spoiled by both the Wray tornado, and the Dodge City tornado family just two weeks ago. I’ve succeeded beyond my wildest first year dreams and I want to get better so that this can continue!

Back to chasing and forecasting.

I promised to explain more about how I forecast, and I also said that I’d be fairly embarrassed by it. Unfortunately I didn’t save off any of the model pictures I used to decide on this target. So I don’t have any good information to share. For this chase, I mostly focused on CAPE values and the supercell composite.

There was another reason why I chose my target area. One of the things I’ve seen over and over since moving here is that storm initiation frequently starts around the Castle Rock area. With that in mind, my plan was to head for Elbert and then play north or south as required.

I got out of town a little later than I thought. I stopped at Home Depot for some soft rubber weatherstripping to stick on my dashcam mount to lessen road shock. I’d gone through the non familiar pre-chase errands of getting gas/ice, scrubbing the windshield like a maniac, and grabbing a quick lunch. Then I noticed I’d left my sunscreen and mosquito repellent at home.

Damn. I burn by simply looking at the sun, and I apparently taste delicious to biting insects. If I come home looking like I did from Kansas I might be put into quarantine this time. The bites on my ankles are FINALLY going away and it was awful. So I went home to grab them.

Then I found out that both of these items were still in Heather’s car, which was at her work.

I scrounged around under the bathroom sink and found an old spray sunscreen, lightly scented with jasmine or something to that effect. Must be Heather’s. There was no bug spray to be had so I just hoped that mosquitoes really hate jasmine and hosed myself down, then took off.

I took Parker Road south out of Centennial. The I-25 would almost certainly have been faster, but Colorado residents drive like they’re being pursued by demons and I get tired of being constantly tailgated even when going 10+ over the speed limit. Parker (or US-83) has less traffic and offers a much more scenic drive, with exit options to the east if I needed to change plans. It was a great drive since it was early afternoon on a Monday.

I took a couple of really well maintained dirt roads west of Elbert, then entered the town of Elbert and turned south on Elbert Road.

I got on SH-94 and flew east until I got to within 5 miles of Aroya, just west of Wild Horse. If those names mean nothing to you, welcome to the club! I know nothing about eastern Colorado towns.

There were two severe warned storms, both exhibiting rotation, to the far east and southeast of me. There was also a new storm gaining strength almost right in front of me. Radar indicated some rotation, but I kept staring at the massive rain foot coming out of it. I chose to turn south and stop on a county road to photograph it. 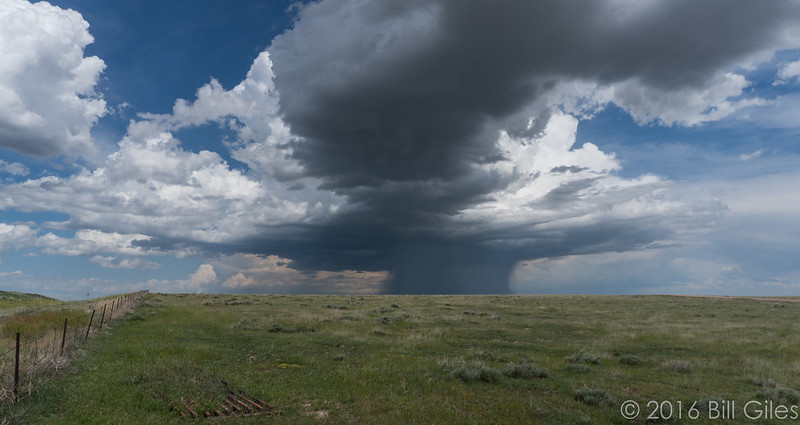 The storm started to move away so I jumped back on SH-94 and went east a few miles, then south down another county road. I stopped right next to a bunch of cows, who all stared at me for a second.

They all started mooing at me. ALL OF THEM. 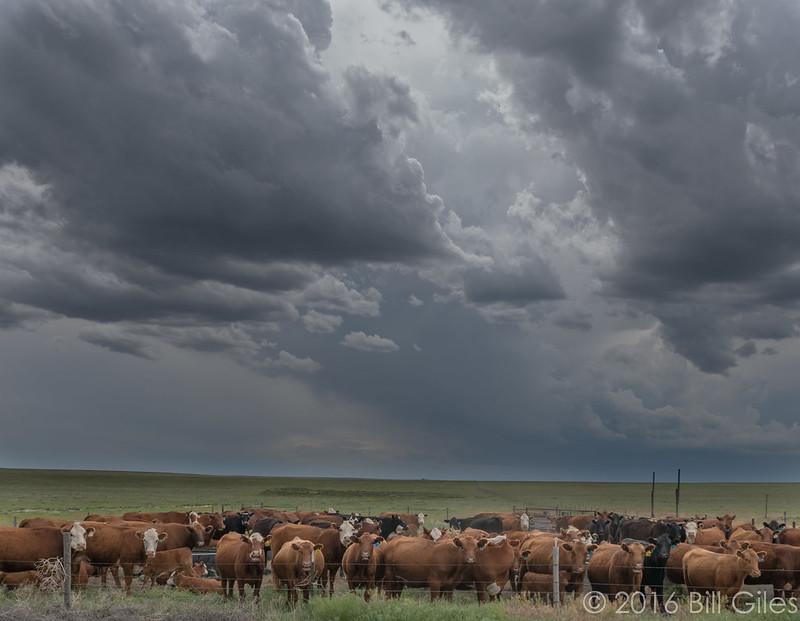 I guess I speak cow. I turned my back on them and took some more pictures of the retreating storm. 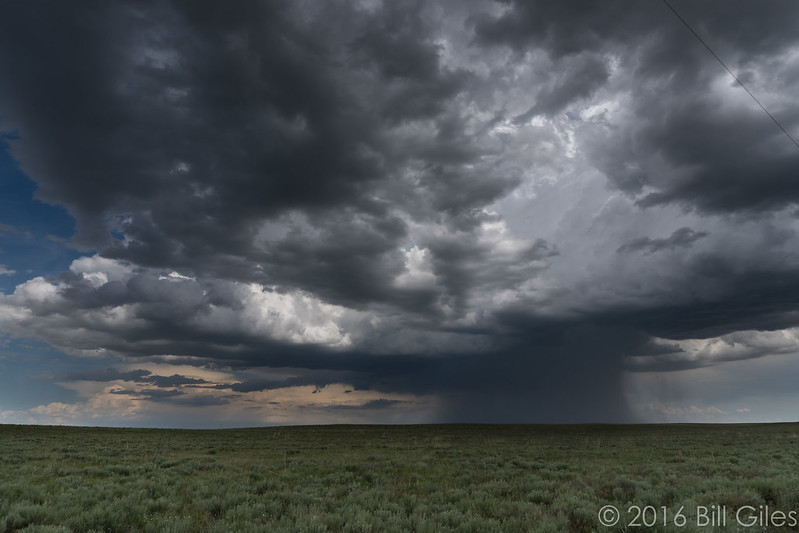 Then I moved to the other side of the road because then I could point the dashcam at the storm.

Also the cows were creeping me out a little. They just kept mooing.

I left this next picture uncropped and mostly untouched to let you see how far I’ve come as a photographer. 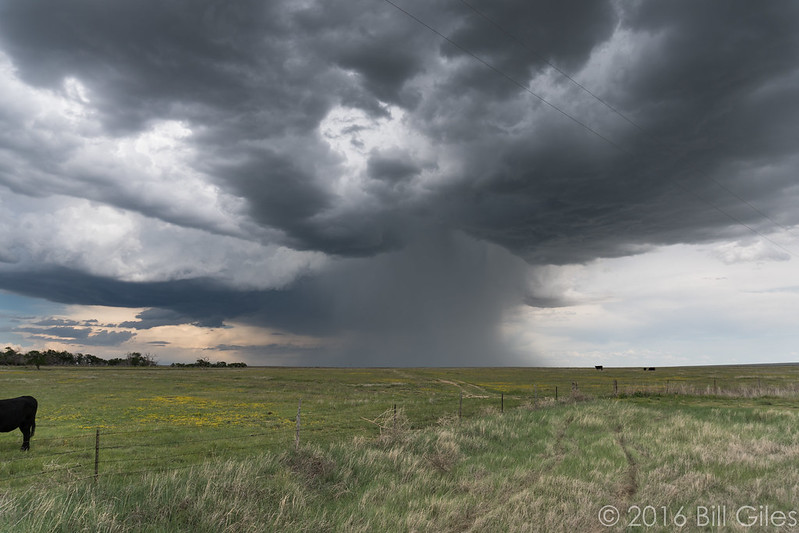 More mooing behind me.

Some chasers passed me and waved, but we didn’t talk. I moved further south and passed them as well a little later. They were all set up and taking pictures and I didn’t want to bug them so I just drove by as well. The local farmer I’d talked to (and talked to…and talked to) in Kansas during the Dodge City day has made me a little more self conscious about just dropping in and babbling at chasers doing their thing.

The storm was still moving south and was starting to noticeably deteriorate on radar so I went a little further down my dirt road. It was looking sketchier the further I went and it didn’t show up on Google maps, so I was reluctant to proceed further. Another small cell formed almost over my head and started lightly hailing on me, which helped me decide to leave. It wasn’t very strong rain or big hail, but it did limit my photography options. So I finally abandoned the storm and my bovine cheer squad and headed for Kit Carson, then south. It looked like a fairly strong looking storm to the southeast was about to dump hail on Eads.

By the time I got to Kit Carson, it looked like that storm was weakening a bit too, but I continued on south down US-287, passing chasers here and there. I stopped at a dilapidated old ranch and took some lackluster pictures of mammatus clouds, but it looked like the main event was either done, or hidden by haze. I was only a mile or so from the precipitation signature and figured I could try to make it a week without being blasted by hail. So I watched it for ten minutes until it weakened and left, heading north and west to catch another storm that had formed to my northeast. 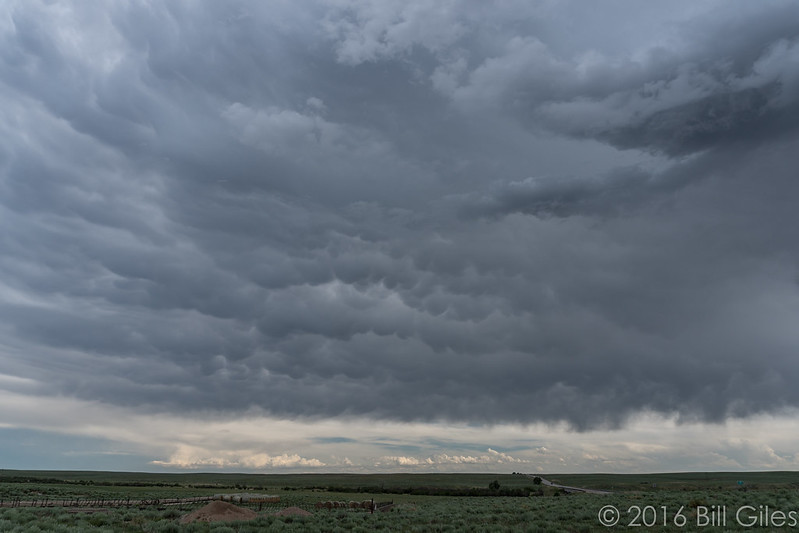 I ended up being late to that one; it had moved south and now the dirt roads I’d used earlier had been thoroughly drenched, making them risky to use. It was now about 5PM and storms were really blowing up around northeast Denver. I decided to head home, maneuvering around the storms as need be and stopping for anything good.

This went fine until I reached an option to turn north and head down county road 109 to Hugo. I was looking at a line of storms moving directly east and northeast right at me. I was contemplating just punching through them, but I thought I could move north, then east again towards Limon and skate on by. I also really wanted to take SH-86 home since it runs right to Parker and lets me avoid the main freeways, now busy with rush-hour traffic.

My plan was to go north to Hugo, then east to Limon. A quick break in Limon and then straight east home. They looked perfect; the storms that were moving east from Denver all seemed to be heading northeast on radar so I’d squeak in-between the two lines of storms moving out from the Rockies and get beautiful skies on both sides. 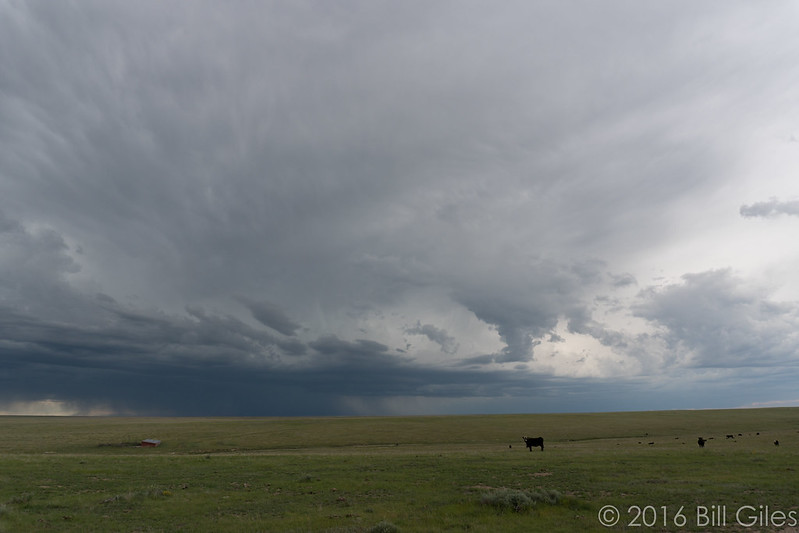 I stopped in Limon at the Wendy’s, used their restroom (and didn’t buy anything because I am a terrible person) and left. I was there five minutes.

During those five minutes the radar updated and showed all of the northeast storms now moving southwest. What the hell?

I ended charging straight through them. Lots of rain and lightning, but no large hail; a good way to start June! I’d also just replaced the mirror destroyed in Texas so it was nice to continue to have nice things.

Random last photo: a shot I got by pointing straight up. Taken when I stopped south of Kit Carson, north of Eads. Desktop wallpaper maybe? 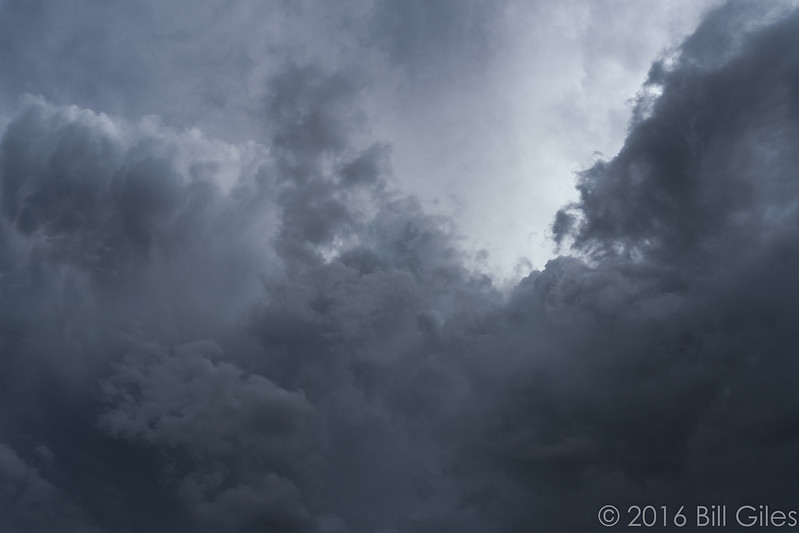