This evening: Storm chasing by bicycle.

Heather and I were taking a ride on our new bicycles 1Purchased as per Colorado state law that mandates every resident own one. I’m still not sick of this joke. this evening. We live pretty close to Cherry Creek State Park (which is huge and amazing) so we were pretty excited to get out and start exploring further than our evening walks have allowed us to.

We were pretty under-prepared for this ride, as per my usual operating procedure when leaping into a new hobby. We had helmets 2This is the first time in my life I’ve worn a bicycle helmet. It was weird! I’m a product of the 80’s and we didn’t wear helmets back then. We also had lawn darts. Good times! but we didn’t have insect repellent or any sort of eye protection.

While riding, Heather ate a bug. I laughed and then one flew into my eye.

I guess it wasn’t that funny.

We saw three different groups of deer, some of them bucks. I have no pictures of any of this because I didn’t buy a bike mount or exercise arm strap to carry my smartphone. I wasn’t going to risk the new camera on our first ride either. I guess it’s true that you never forget how to ride a bike, but it’s been a long time. Personal balance and I were once close friends but we’ve apparently drifted apart.

Heather did buy a armband so she had her smartphone with her. On the way back we stopped frequently to admire the beautiful sunset and accompanying storm receding in the distance. She got some pictures, but it took awhile each time for her to dig the phone out of her armband, take the picture(s), and put it back together.

After the third or fourth stop, I realized that the storm was headed our way. We were both tired from the ride, but I thought we might have an opportunity here.

We beat it home and ran the bikes back up to the apartment, grabbed our cameras, and jumped into the car. We opted to drive back to the park’s “dog off-leash” area 3Another wonderful thing I wish Arizona parks had, but probably can’t because of the amount of venomous wildlife. and quickly set up. After a lot attempts, Heather and I both took this same picture. 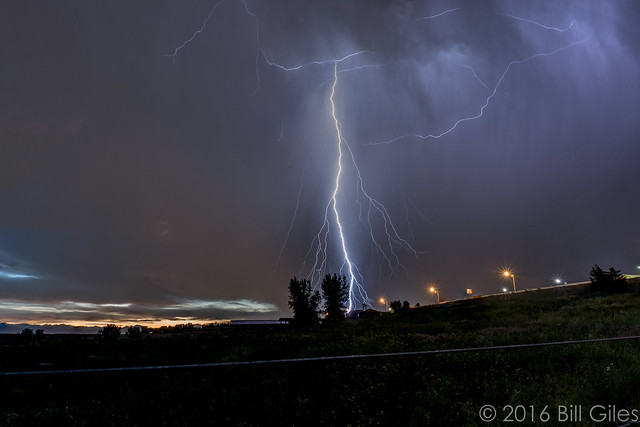 Ok, I admit I cheated a little. My version of this photo stacks three different lightning shots. But that center bolt was one photo by itself, and it’s the best lightning shot I’ve ever taken. We got about fifteen minutes of lightning photography in before we had to run for the car to escape the rain.